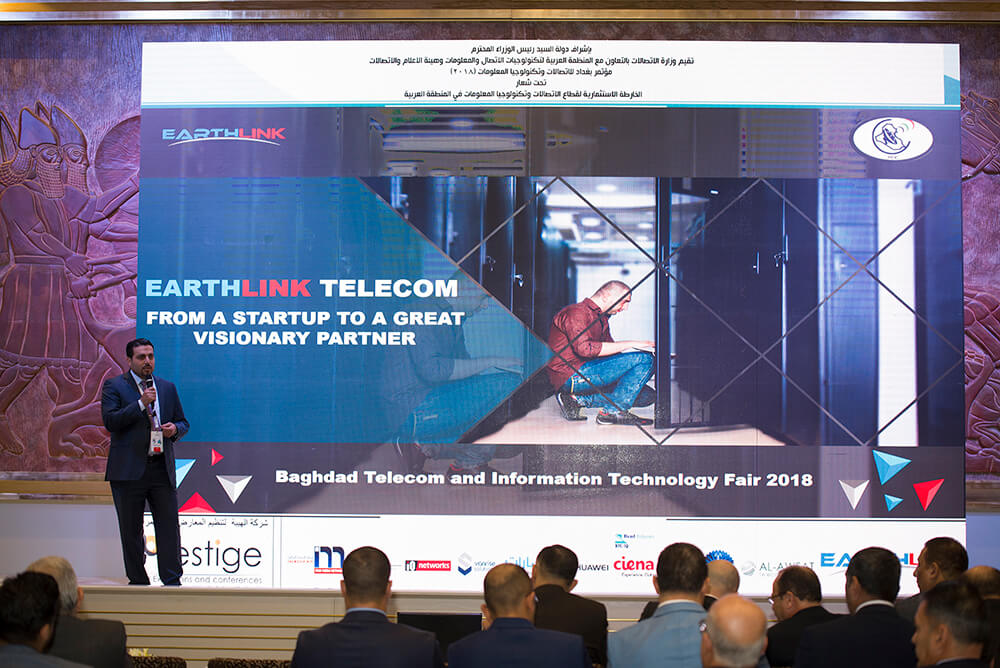 The conference, entitled “The Investment Map for the ICT Sector in the Arabian Region,” addressed investment in the Iraqi communications sector and the adoption of technology for building a new Iraq. The event highlighted the achievements of telecommunications companies on different projects, including the National Internet Project carried out by Earthlink and its partners.

In his opening speech to the conference, Iraq Minister of Communications Mr. Naeem Thajeel said that the “wheels of development” would not begin to turn unless the ICT sector developed. He then invited companies attending the conference to invest in the sector, saying that this would not only represent “an important axis to turn the wheels of the Iraqi economy,” but would also have “important implications for areas of sustainable development.”

Encouraging Arabian and foreign companies to invest in Iraq

Mr. Zaid Mahdi, the commercial director at Earthlink and a speaker at the conferences, made it clear that investment in Iraq was “a big risk surrounded by difficulties and obstacles” which called for “tact and measures.”

He went on to say: “From its establishment fourteen years ago until now, Earthlink has managed to provide internet services to more than 65% of the internet market in Iraq. And that’s a big achievement that wouldn’t have been possible without the endless support of the Ministry of Communications. However, the biggest challenge we’ve faced in our work is the erosion of Iraq’s telecommunications infrastructure. After making a series of studies based on data and readings related to the growth of the telecommunications sector in Iraq. We concluded that the infrastructure would not be able to keep pace with the increasing demand for the service in 2019.”

Mr. Zaid continued: “Our first step towards improving the telecommunications infrastructure in Iraq was to set up the National Internet Project to develop communications. The second step is to reach all end users in Iraq. And once we have done that, we will have created a network infrastructure that covers the entire country.”

Mr. Zaid confirmed that Earthlink is willing to cooperate with the Ministry of Communications. This collaboration will provide an appropriate investment environment for Arabian and foreign companies. One in which investors are able to use the National Internet Project infrastructure to complete the Iraqi government sectors’ move towards e-transformation. We contributed to the move through our part in the Amal Tech Initiative which completed the first project to manage hospitals electronically in Iraq. As a result, we decided to offer our official support to the conference. Because we believe that highlighting the communications sector. And concentrating on developing the infrastructure would help Iraq to develop similar projects in areas such as e-governance and e-learning.

The ICT conference also included a speech from Mr. Sami Al Araji, Chairman of the National Investment Commission in Iraq, on the telecommunications sector, which, according to Mr. Al Araji, is the “nerve of life” and represents an important resource for enabling Iraq to open the doors of investment.

Al Araji added: “There are a lot of areas to invest in. Especially the fourth generation that we have been waiting so long for. As well as the smart city that we are working on in close collaboration with international companies to make it happen soon.”

The conference was held in the presence of Jordanian Minister of Communications, Muthana Hamdan Ghraibah; the Secretary-General of the Arabian Information and Communication Technologies Organization (AICTO), Mr. Mohamed Ben Omar; the representative of the Arab League, Mr. Khalid Khudairi; undersecretary of the Palestinian Minister of Communications, Mr. Suleiman Mustafa; chairman of the Executive Committee of the Media and Communications Commission, Dr. Ali Nasser Al Khuwaildi; chairman of the Board of Trustees, Mr. Ashraf Aldahan; and a number of Arab ambassadors and representatives of local and Arabian telecommunications companies.