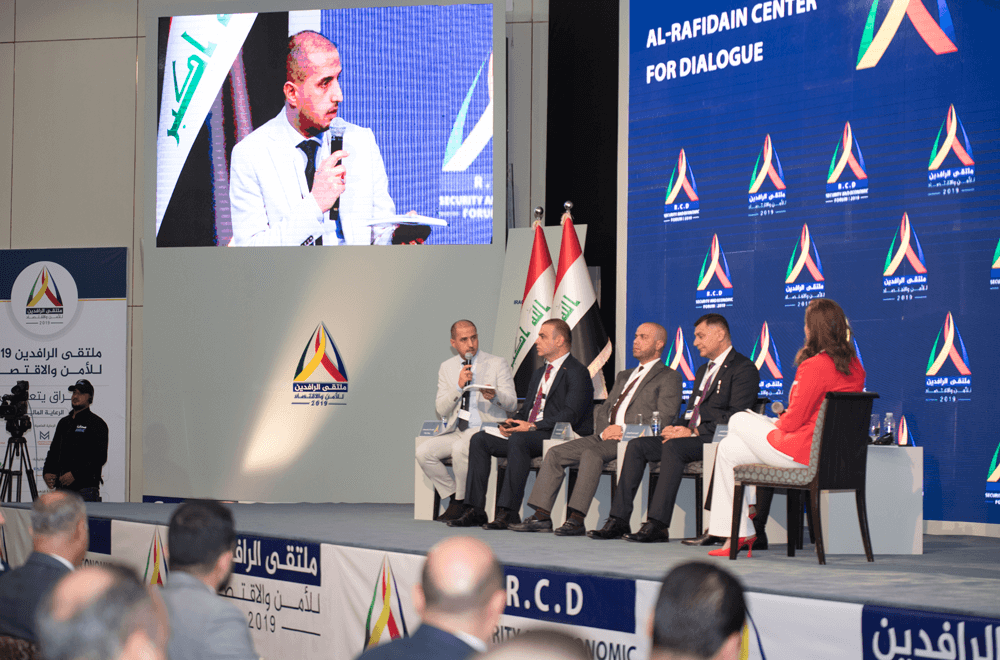 Al Rafidain Forum for Security and Economy held last September, a special session to discuss the reality of the telecommunications sector in Iraq as part of a group of sessions that discussed the security and economic files in the country. The forum was sponsored by Earthlink company for Telecom and Internet services and was organized by Al Rafidain Center for Dialogue.

The Minister of Communications Dr. Naeem Thujail Al-Rubaie was present at the session along Dr. Naeem Al-Abboudi, the Chairman of the Communication and Information Committee in the House of Representatives, Mr. Ashraf Al-Dahan, Chairman of the Media Commission, Dr. Alaa Jassim Moussa, Executive Vice President of Earthlink company, and Third Area Manager of Asiacell company Mr. Saman Bojan. In moderating the session was the show host in the Eastern channel: Nawar Asim.

During the session, the Minister of Communications, Dr. Naeem Thajil al-Rubaie said: “The current situation indicates that the infrastructure of communications, has been tampered by ISIS during their presence in some Iraqi provinces. This affected the quality of communications’ services”

He added: “The Ministry of Communications is taking quick steps to address the technical problems as reported by Iraqi citizens. Although the ministry does not have the required liquidity, it will depend on its partnership with the private sector to improve the file of communications in Iraq.”

Moreover, Dr. Al-Rubaie discussed the importance of optical cable service and its role in providing good services to the Iraqi citizen, and he stressed Iraq’s need to promote the presence of the private sector in the Communications file.

During this meeting, the minister of communications was asked about the deterioration of the Internet service while Iraq is entirely dependent on the wireless internet service. He was asked by the attendees among whom was the former Minister of Housing and Reconstruction, and member of the parliament Mohammed Darraji, who criticized the Ministry of Communications’ lack of support of the partnership with the private sector; a partnership that would ensure the provision of high-quality services.

Moreover, the Chairman of the Committee of Information and Communication in the House of Representatives, Dr. Naim Al-Aboudi stressed the need for protecting the consumer and providing a service that meets his needs and expectations. He also emphasized “the importance of employing the advanced optical cable service due to the great impact it can bring to the internet sector.”

“There is a dispute between the Commission and the ministry,” said Ashraf Dahan, Chairman of the Media Commission. “This dispute requires the existence of a law that shall clarify the authorities of each of the two institutes.” He also added, “These disputes are among the reasons behind the communications sector problems.” Dahan also believes that “such disputes can be solved by establishing a law that defines each institute’s authorities.”

On his part, Executive Vice President of Earthlink company, Dr. Alaa Jassim pointed, during the session, to “the problems that the telecommunications sector faces in Iraq”, and he suggested “solutions for these problems; solutions that can provide continuous and stable services to users.”

Mr. Alaa Jassem stressed the importance of “switching to optical cable technology instead of wireless services”, and he emphasized that “the national Internet project is capable to provide 200 thousand optical cable lines to homes every three months.”

Executive Vice President of Earthlink company tackled the technical problems of the wireless service, and the inconsistency of frequencies that cause them to interfere with each other, resulting in a poor service delivered to users.

“Users think that 4G technology is being delayed by internet companies, but the fact is that we are awaiting authorization from the Media and Communications Authority to start implementing it,” Said Mr. Saman Bojan, Third Area Manager of Asiacell company.

The sessions were attended by local and international persons and executives, as well as a group of ambassadors and diplomatic delegations