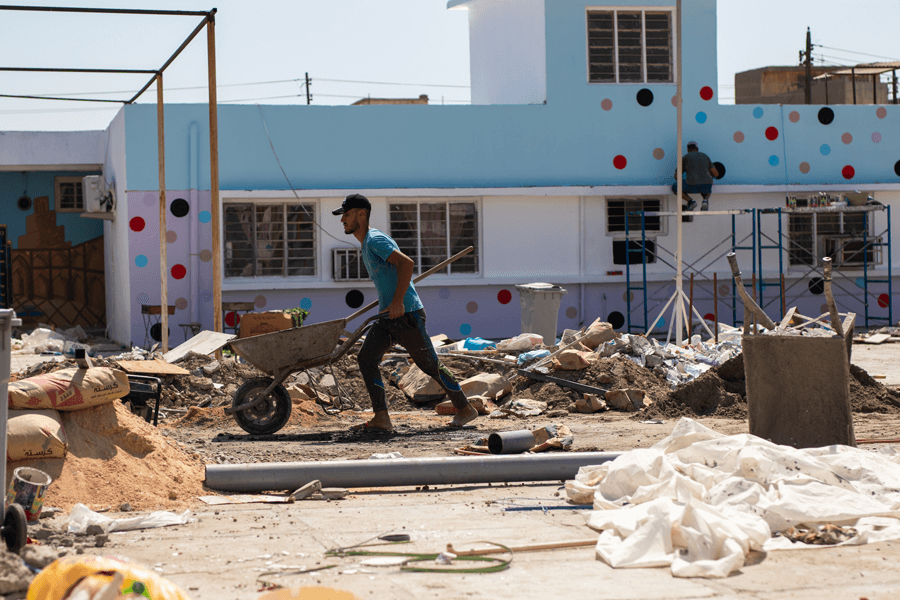 Since its establishment in the 1950s, Ishtar School has provided vocational education to many generations of female students. The school is currently teaching more than 170 students and it’s now facing the risk of collapsing because of its old construction. There are many cracks in the concrete, and rainwater seeps on female students and teachers.

In an official letter, Ms. Samira Majed Manati, Director of the Ishtar School, sent to the Media and Communications Authority saying that: “The administrative body and teaching staff of Ishtar Vocational School for Girls, located in Baghdad province- Al-Karkh- Hay Al- Jamiaa have been briefed on du3M’s initiative for the Media and Communications Authority. This initiative and its objectives are approved by the distinguished Council of Ministers a stated in its objectives and activities. Therefore, the staff looks forward to making the construction of the school part of, as it contributes in the graduation of staff related to the media and communications sector, and these staffs need to provide an appropriate study environment to help achieving the goals set for them during their study career.”

Ms. Manati added that “many of the school classes need urgent maintenance because of the leaking of rainwater in winter, due to the need for the roof of the building for maintenance and restoration,”. Adding that “the school needs urgent expansion as well, to suit the number of female students, as well as the expansion of laboratories, and workshops that Offer students vocational training, and the problem can be solved by building three classrooms.”

The school principal explained that the urgent need for the restoration of the classrooms including the seat for female students and other educational requirements to make them suitable for receiving and giving which prompted personal donations in the past, where the building was restored in general after it was about to fall threatening the school with evacuation.»

The Communications and Media Commission addressed Earthlink and Scope Sky, stating that: “The objectives of du3M 2025, contributed by Earthlink, provided for the development of the ICT sector in a way that contributes to increased economic growth and achieving sustainable development goals.”

Because the education sector is the key to building the capacity of future generations through the development and skills of this sector, the reconstruction of the school will contribute to the progress and prosperity of Iraq, as the DU3M initiative seeks.”

This support is part of a series of sustainable development projects that Earthlink has chosen to be the focus of education, as it is the mainstay of society, which will benefit directly from two of the three pillars of sustainable development: the economy and society. It contributes indirectly to the achievement of the third axis: the environment.

Earthlink has already sponsored similar projects aimed at developing education in Iraq. This includes sponsoring the first e-learning project in Iraq that was implemented at Baghdad College High School and participating in the modernization of curricula for Iraqi universities in cooperation with the International Research and Exchange Council (IREX). In addition to presenting the” Tamkeen “Project, the first project to support girls’ education in Iraq, and the establishment of a charity training center in cooperation with AL– Ghad AL-Mashreq charitable organization

Earthlink also offers annual summer training to university students to help them know more about the work market and qualify them to find the right jobs after graduation.